This build is heavily inspired by UAVfutures’ 110MPH build with some changes. Building this quad had its ups and downs as you can tell from the rest of the article. While I don’t give up easily in the face of challenge, I’d like to point out that after having issues with 2 of those Racerstar StarF4S boards, I DO NOT RECOMMEND them for your build and am myself looking for an alternative. The board was ok while it worked and I had a ton of fun flying my quad for a month and a half, but having 2 of those boards fail within ~ 2 months is the threshold of my patience.

As some of the parts arrived I decided to do an initial test assembly of the frame to have a look at components and potential pitfalls and I did indeed find one. The screws that came with the BrotherHobby Returner motors were too short for the thick 6mm arms of the Realacc Furious frame. Luckily I had also ordered an assortment of screws and hope to find a fitting match there. 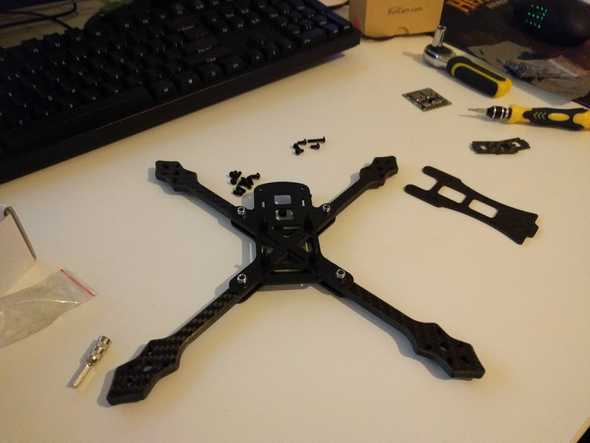 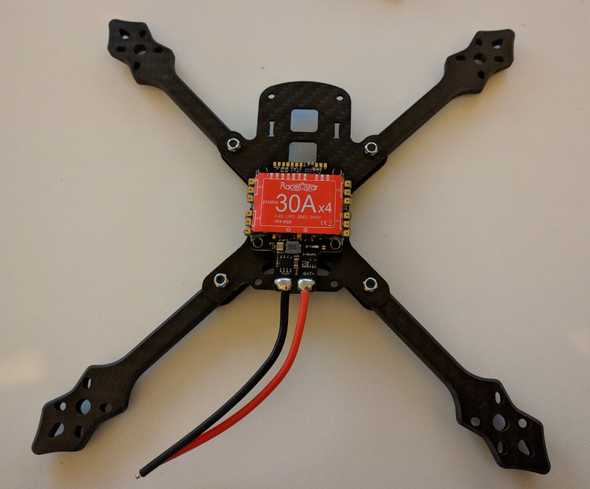 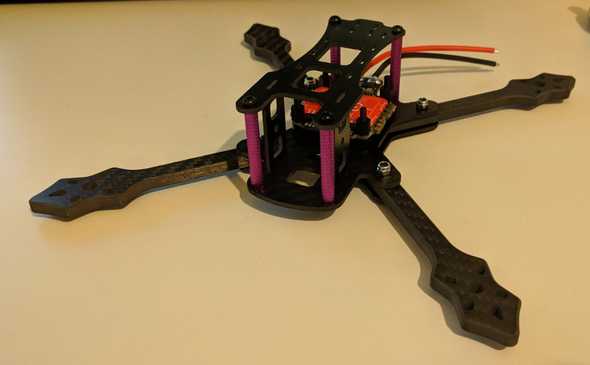 It seemed that 10mm was the perfect length screw I needed to get through the frame arm and just enough into the motor. Additionally I used some loctite threadlocker and tightened the screws properly. Here’s the frame with the motors mounted. 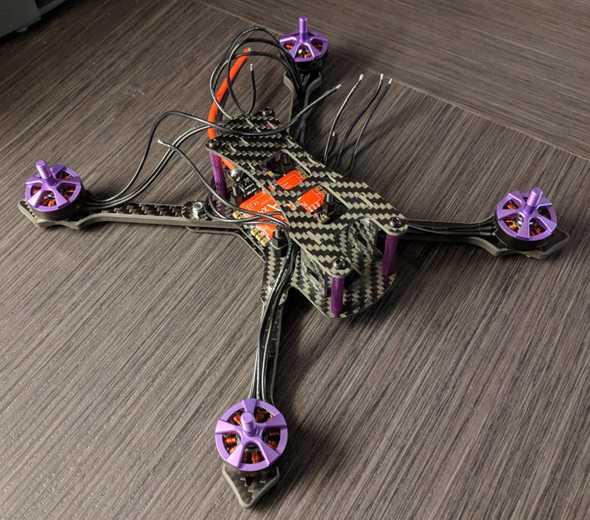 3. Solder the motors to the ESC

This step was rather straight-forward and consists of the following steps (repeated for each motor):

Caveats and things to look out for: 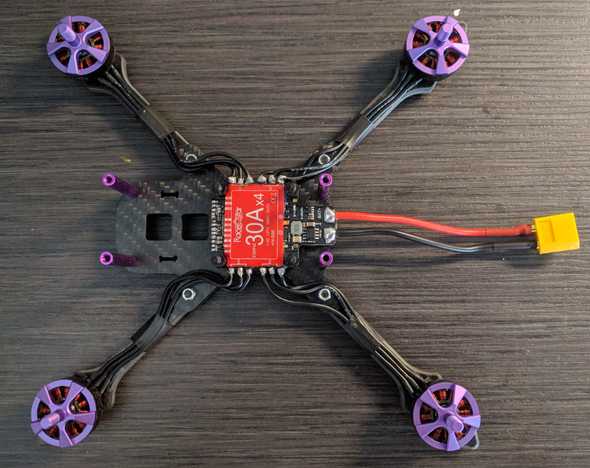 While at it, I also soldered an XT-60 connector to the battery leads. You do need to be careful for polarity. Here’s how the wires should be connected. 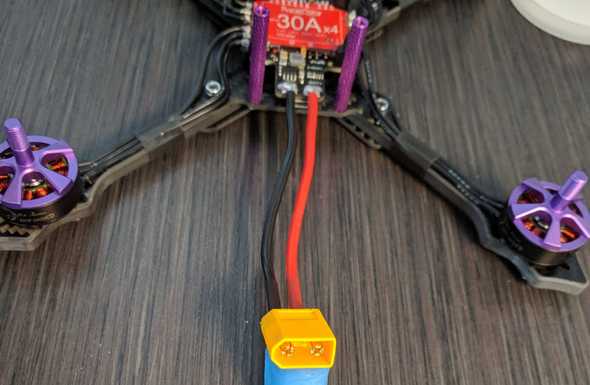 4. Solder and bind the receiver

Since the next item to arrive was the Frsky XM+ receiver, I worked on that next. 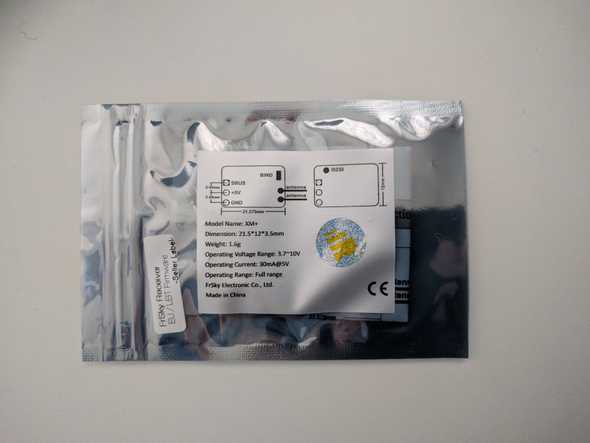 First solder some wires to the receiver as seen on the picture below: 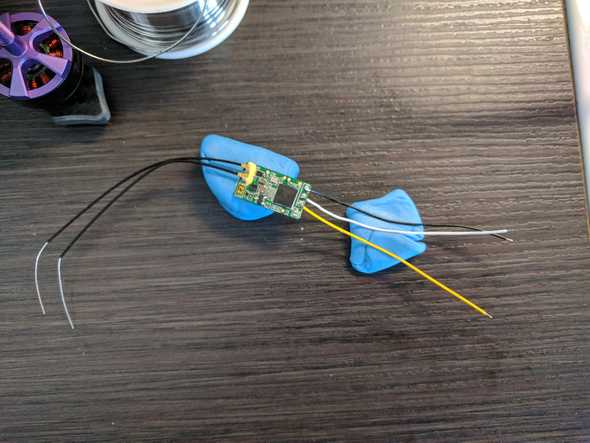 The other end of those wires go into the flight controller’s front right hand solder pads as seen on this picture. 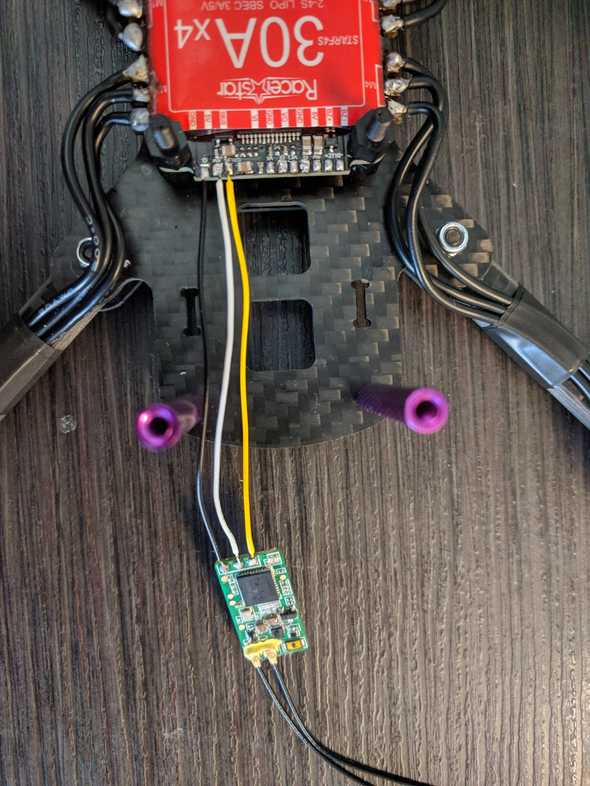 Basically look for SBUS, ground and 5V pads close to each other. With the receiver soldered the next step is to bind it to the receiver.

On the radio’s Mixers page I mapped channels 5 and 6 to a couple of switches. I will use those later in Betaflight as AUX1 and AUX2 for arming and flight modes/beeper.

With the receiver and radio all set up it’s finally time for a motor test to see if everything works correctly (although 2 of the motors’ direction still needs to be reversed with software). 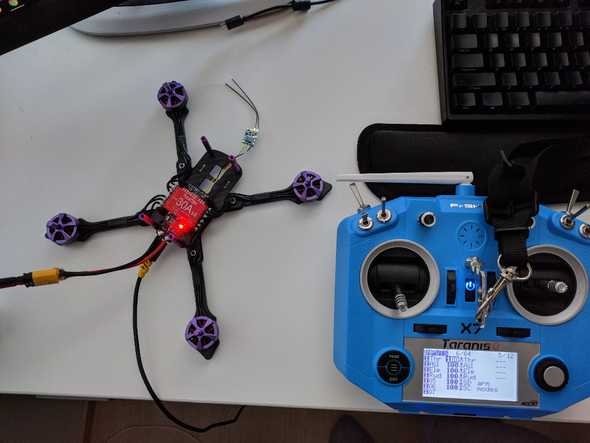 Again, can’t stress that enough, never have propellers on when working on your quad and / or the motors. In Betaflight I setup up and arming switch and chaned the receiver channel mode to TAER to match the mode in the transmitter. At that point the channels were mapped correctly and seemed to work fine.

Then I armed it for the first time and all but one motor worked. The front-right motor does not start up at all. As a first test I desoldered and resoldered it back but it still does not start up. To be continued…

Either way, here’s how to setup the motor rotation in the BLHELI configurator. The first picture shows the default setup when I first plugged the quad in. The second picture is the end result. 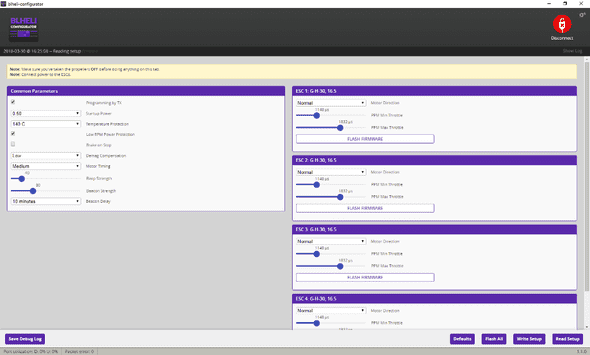 As you can tell, the only difference was setting motors 2 and 3 to be in reverse direction. That does the trick. 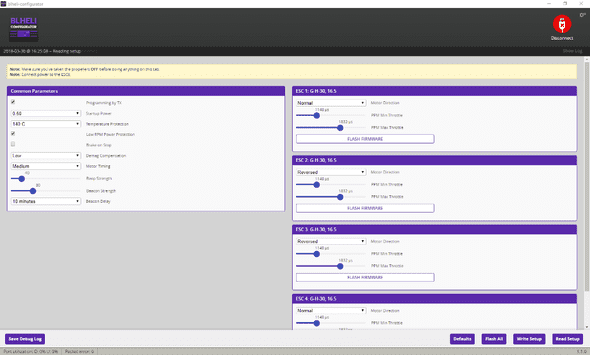 To top it all off, when I was trying to connect a micro USB cable to the flight controller the micro USB connector fell off the board…

Building and repairing quads certainly requires a lot of learning and investigation. It’s one of the best parts of the hobby and also sometimes one of the most frustrating ones. When seriously stuck, taking a break always helps (works also with programming).

Having concluded that a dead ESC fried one of my motors, I purchased a new motor and requested a refund for the 4-in-1 board. While waiting for those to arrive I decided to also get my hands on a multimeter and make a smoke stopped.

Once the new motor and flight controller were here, it was time to resume the build. Once again, I quickly soldered in the motors to the ESCs, and the receiver to the SBUS.

I tested everything for continuity with the multimeter and plugged in the smoke stopper. It was finally time to plug in the battery and test the build.

The quad booted up and when I armed it, all 4 motors started 🎉!

It was finally time to continue the build as all the rest of the components had arrived already. 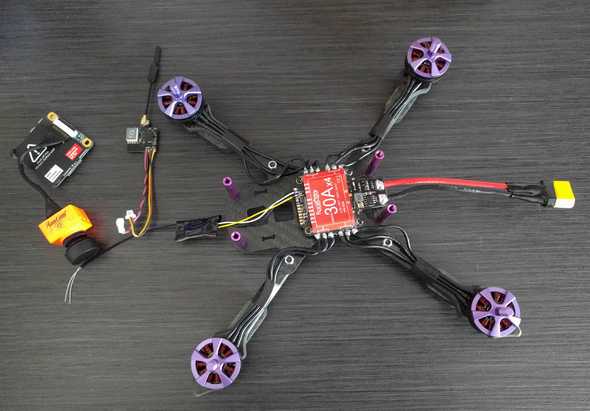 I decided to use a Runcam Split 2 camera that I could just mount on the stack. 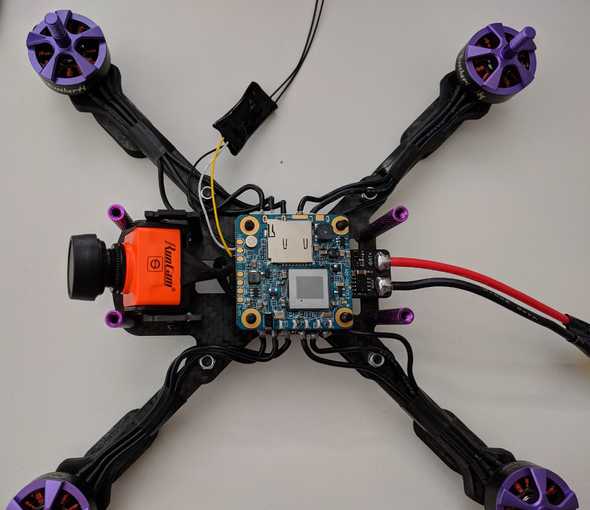 The next easy step was to solder the Eachine VTX03. The black and red wire were soldered to the ground and 5V pads on the FC. The cluster with 3 wires, however required some work. The yellow wire was soldered to VO (Video Out). The other 2 wires from that cluster were obsolete and were cut at different lengths and shrink-wrapped to prevent shorts. 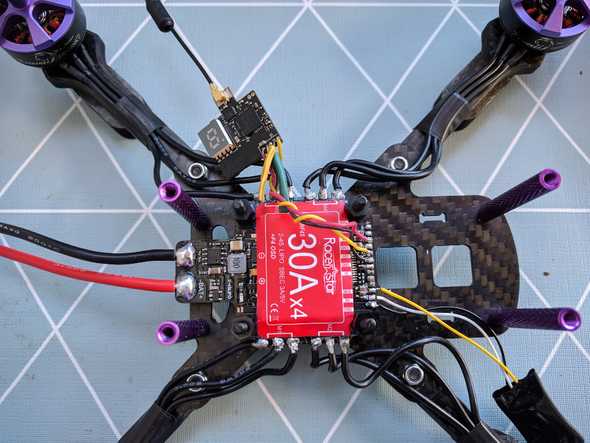 Next up, I prepared the Runcam Split 2. I had to solder 3 wires to the back solder pads: red to 5v, black to ground and yellow to video signal (not audio!). 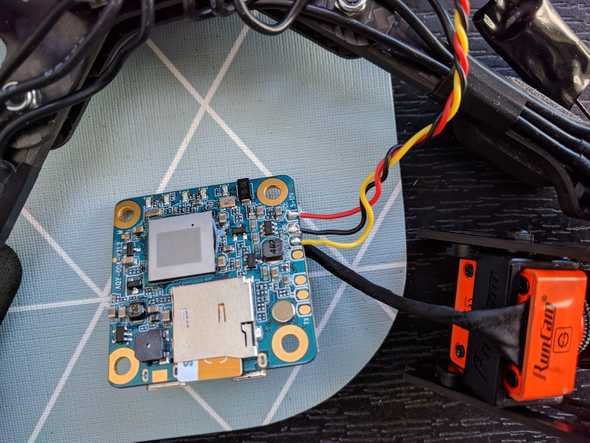 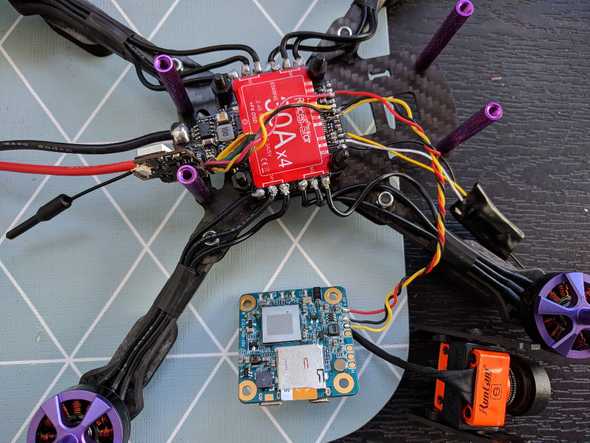 And a bit closer. 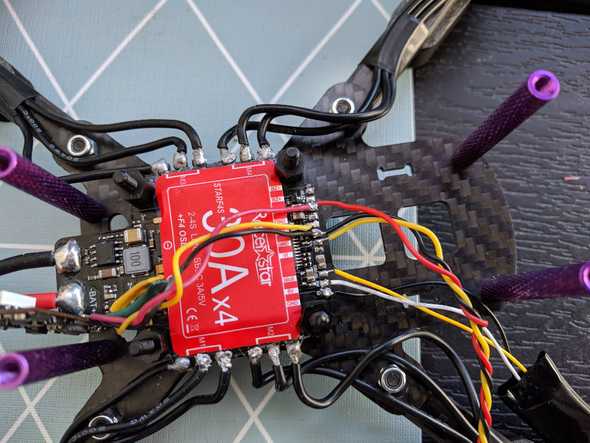 If you followed along, congrats! You just build a quad!

This was my first quad build and while there certainly were some setbacks and unpleasant moments, I learnt a lot and can’t wait to have even less painful builds in the future as I get better at this.

For now let’s take this quad for a maiden flight and … realise that the motors are messed up. Always verify the motor directions on a new build. I trusted solely BLHELI and although motor 2 and 3 were indeed correctly reversed, I had to reverse 1 and 4 also (?!). Something with the wiring I guess. Whatever the case, make sure you test the rotation of the motors and make sure they are correctly setup.

Lastly, I’ll upload a video of the maiden flight as soon as I have completed it! Happy flying! 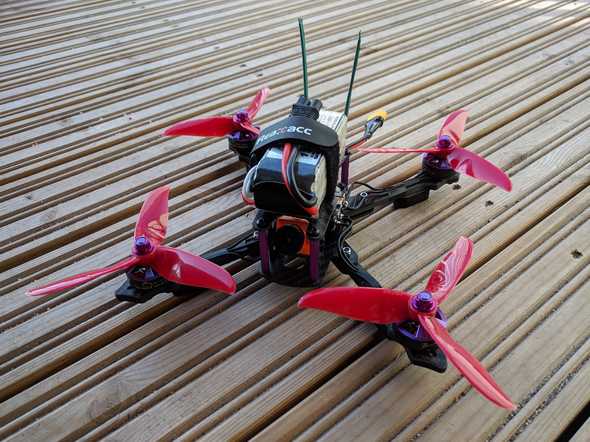 Here is some 1080p 60fps footage from the maiden flight: